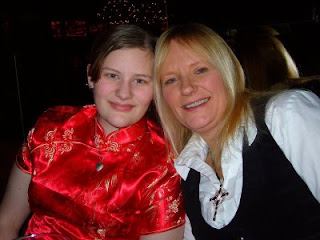 This seems to have been a year of many changes for me and for the people around me, the latest one being my youngest daughter, Gracie, who is moving away from home. And she's not just moving down the road...she is moving to another city, Vancouver. She is moving in with a friend and neither of them have a pot to pee in. Literally :-).

So I've been digging around through the cupboards to find old cutlery, cups, plates and other bits and pieces to get her started, and all the while I've been thinking about the first time I moved out. I had a bed, a dresser, my clothes and my guitar and a couple of friends with a truck. I moved into a basement suite in Richmond with my best friend Linda who had her bed and some kitchen supplies and her sewing machine.

Between us we may have come up with a table and a lamp or two. But it wasn't much. We were 18 years old, not very old really compared to the age kids are when they move out these days. We were excited about living on our own. But all of these years later I have to admit that Linda did most of the work, the cleaning the cooking and all the rest. I was a lazy ass and didn't think to do things for myself.

So a few months later when we had to move out again because the basement suite was declared illegal, I told Linda that I thought I needed to live on my own. There was a part of me, as dumb as I was, that knew it was time for me to take care of myself. So we parted ways and I found an apartment in Vancouver, not very far from where Gracie is now about to move. I'm sure my Dad lost a lot of sleep when I first left, and I didn't think to call home very often. I was too caught up in myself and my life to think that he might have needed to hear my voice every now and then.

I'm sure he has long since forgiven me, but remembering that now, I have set Gracie up with a webcam for her laptop (she WILL have an internet connection), so that I can check up on her constantly :-). Ain't technology wonderful? Thank heavens.

When I was first living completely on my own, I was a slob and didn't know how to cook anything except rice. I was constantly running out of toilet paper or bar soap and forgetting one thing or another. But I always paid my bills on time because I was afraid NOT to. I got fat from eating too much Kraft Dinner and I got depressed because I had no one to talk to. So I got a cat.

I didn't have a TV, so sometimes I snuck out on the balcony and listened to the news from someone else's TV in another apartment. And over time, I did get used to being on my own and there certainly was a sense of satisfaction in being completely independent. I only ever asked my parents for money once...when I broke the back axle on my car and didn't have enough to pay for it. I didn't have a credit card back then, so I always paid by cash or cheque.

In retrospect, I am happy that I had that time on my own, and I hope that Gracie gets the same sense of satisfaction from taking care of herself. But it's hard to think about her being over there in that big city without me to smother her with hugs and kisses. Okay, maybe she won't miss that part :-)

And that brings me to what this blog entry is really about...the gut wrenching ache of having to let go. There have been many, many parents before me who have gone through this, and there will be many more again. But this is my first time. I am happy to have her experience her independence, but I am sad to know that my life is going to be permanently changed without her here. She is funny, she is the only person in the world I can be a total goof with, she is smart, she sings with me, plays guitar with me, talks about Buddhism with me. She puts up with my smothering and rolls her eyes at my lectures. She sews the small tears in my clothes (I don't sew), brings home a meal from the DQ when I don't feel like cooking, and now she has a dream that she wants to follow. I can't deny her that.

As I said before, letting go has been a recurring theme all year. The truth is that letting go is something we have to do all the time, but it seems that sometimes we have to deal with it in a much more profound way. My father had to let go of his home, and to some extent, his freedom, when he had to move into a care facility back in March. More recently, a very good friend of mine had to let go of her husband who passed away in August at the very young age of 54. And now I'm having to let go of my little girl as she ventures out on her own for the first time.

I wrote a song about letting go many years ago...at the time I was leaving my job and moving onto other things and I actually wrote it for my boss, Mary Jo, who was very soppy when it came to saying goodbye:

Is this goodbye?
Well, we haven't said a thing all day
And it almost time
So I'm wondering when the dam will break
But I know that the road is right
I'm just following all the signs

We spend a lifetime letting go
Resisting it to the end
You can't stop the wind, you can't change the flow
So just love it and let it go

...I am going to miss you terribly, Gracie girl.
Love always, Mom xoxoxo
Posted by IreneJ at 3:44 PM