Last week I wrote about my distaste (understatement) for cleaning the house.  There was a reason I was thinking so much about cleaning last week.  That is because we are going to have Amy McGeachy, the host of "Design District", the home design television series, visiting us tomorrow.   We will be doing a lot of house renovations in the next while and we want to get some of her ideas. The first room on the list is the kitchen.

I have wanted a new kitchen since time began.  Well, at the very least, since I actually had a kitchen to hate.  I have hated all of my kitchens, mostly because we have lived in older homes, our present one being no exception.  It was built in 1944, but when we moved into it, it had last been "renovated" in the 1970's.  The kitchen was completely painted a pale, high gloss green...everything was that colour, including the inside and the outside of the cupboards.  And it had a carpet.  Yes, a carpet.  It was brown.  You didn't want to walk in there with bare feet.  Eeewww.

Eventually we pulled the carpet up and replaced it with linoleum, and we repainted the walls and cupboards a couple of times, and once we even put new laminate on the counter tops.  But even with new hardware, the cupboards were a pain in the butt to keep closed and nothing ever sat quite right. We replaced appliances, we painted again.  Paint upon paint, splattered on the linoleum floor that kept getting new dings and nicks.  Ugh.  The idea of a whole new kitchen makes me delirious with excitement.

A number of years ago we decided we had to completely overhaul our back yard.  We invited an English couple, gardening experts, to come and give us some ideas.  I still remember the look on their faces when they saw the condition it was in, and when we told them how much we had to spend.  Not much.  We've actually come a long way in our back yard with a lot of grunt work, and it is a relatively decent place to spend time in now.  But I'll never forget that look.

Which is why I have spent all week fretting about cleaning before Amy gets here.  OMG.  I half expect to see the same look of horror when she sees our crappy little kitchen. 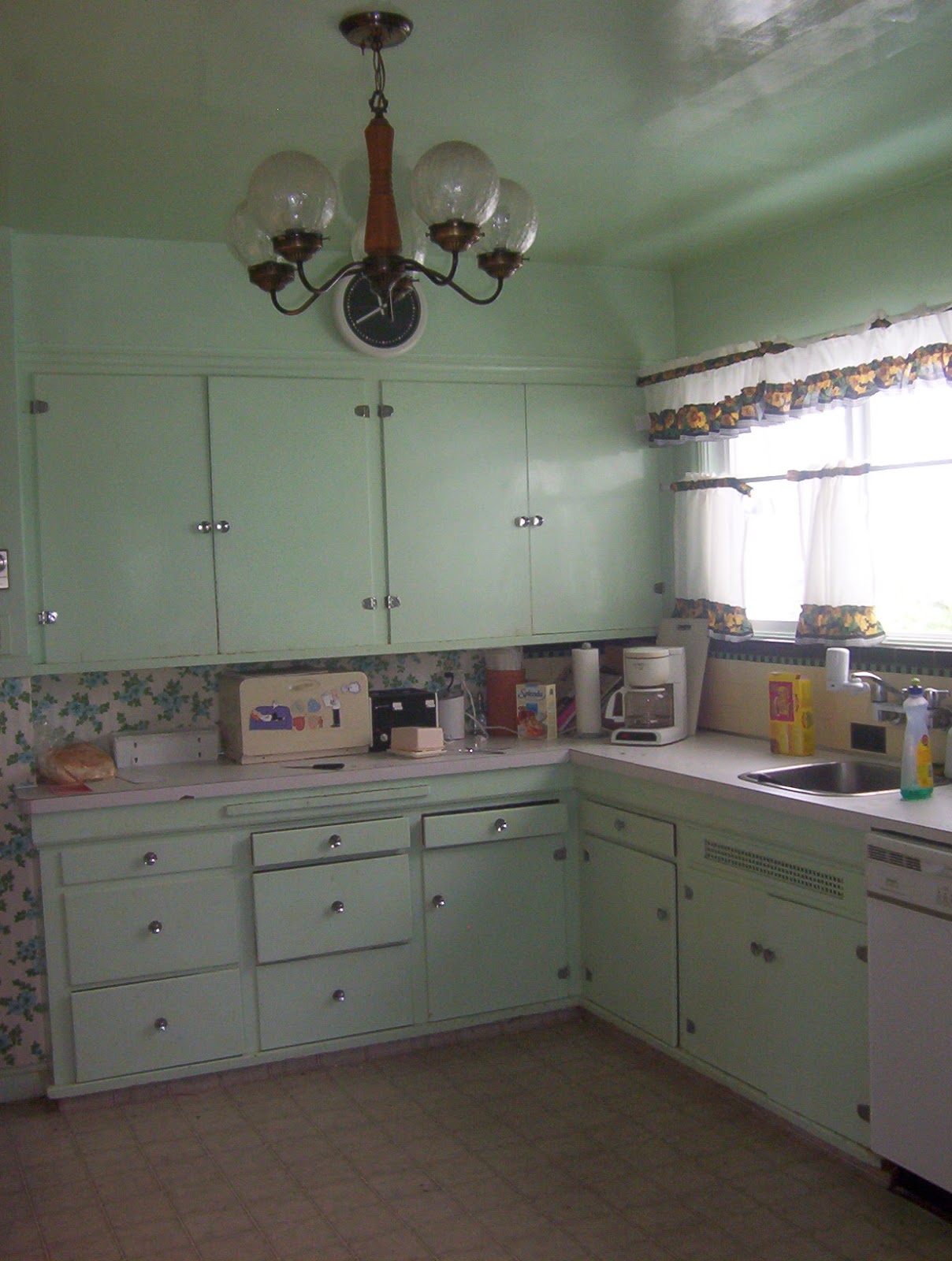 When we first moved in our house in 1988, as you can see from the photo on the left, almost everything on the main floor was painted a pale green colour.  The floor in this shot is vinyl, because we almost immediately removed the brown carpet!

We lived with it that way for close to twenty years and then finally repainted, but I'm not really sure that the colours I chose were all that great.  More of a stand out, but not great.

The picture below gives you an idea of what we did.  We also replaced the laminate counter tops ourselves, going from white to black (not seen in this picture).

It was a valiant effort, but we knew it was really just temporary. 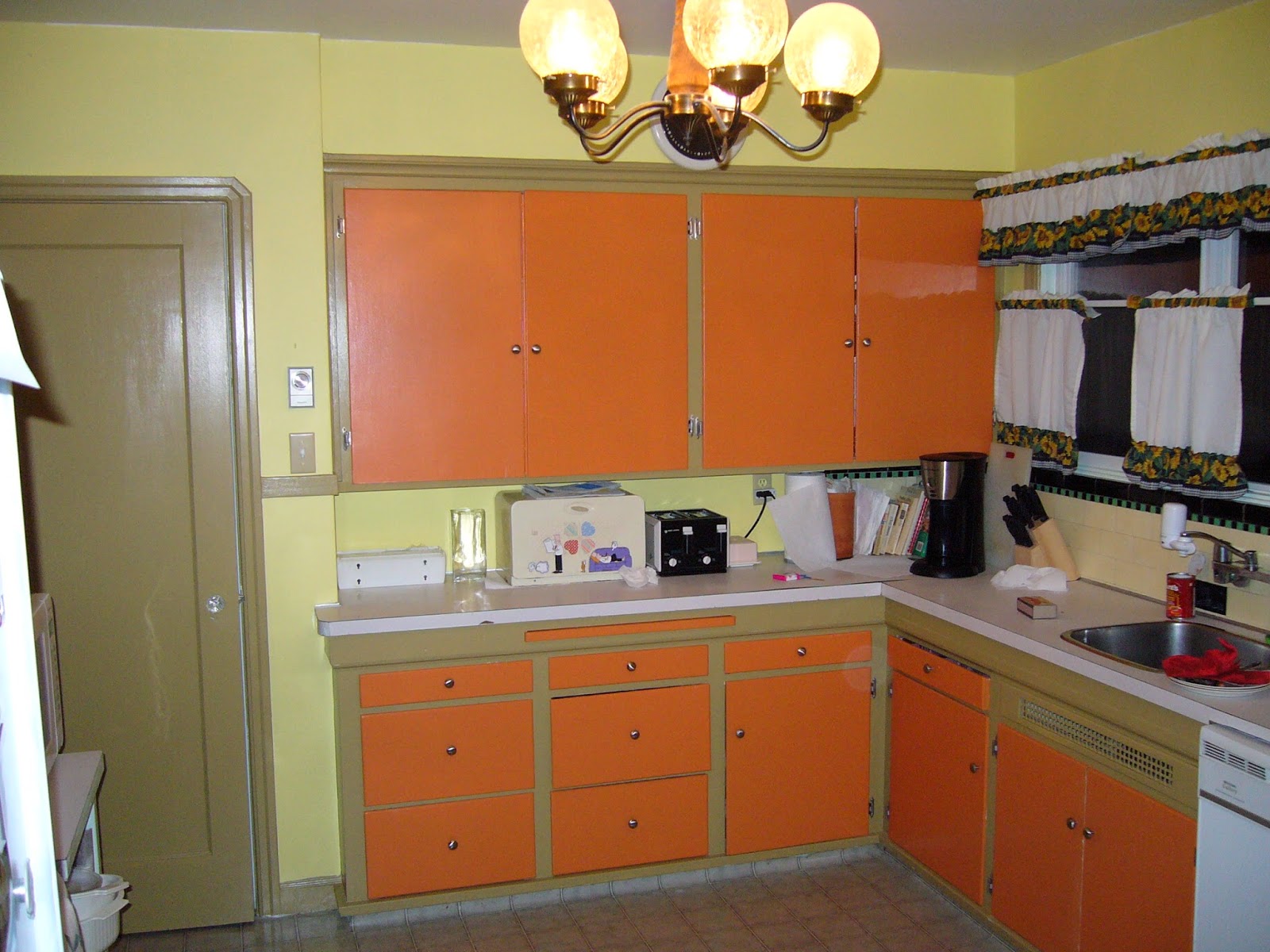 When Amy came last Monday I felt like I was still making excuses for our crappy little kitchen. You know, things like 'we've been more interested in paying off the mortgage' and 'we wanted to do it ourselves but didn't know what we were doing' kind of excuses. She said that she had grown up in a house about the same age as ours, which was built in 1944, and that made me felt a little better, but not much :-).

I learned a few things immediately.  The counter tops are a few inches too shallow.  The cupboards are too low.  The stove is in the wrong place.  Actually our stove and fridge are right beside each other, so having them separate will take some getting used to.  And there is wasted space in a little nook that the previous owners had a small round table and chairs in, but which we don't use.  Except that my daughter uses it for all of her baking equipment and supplies. 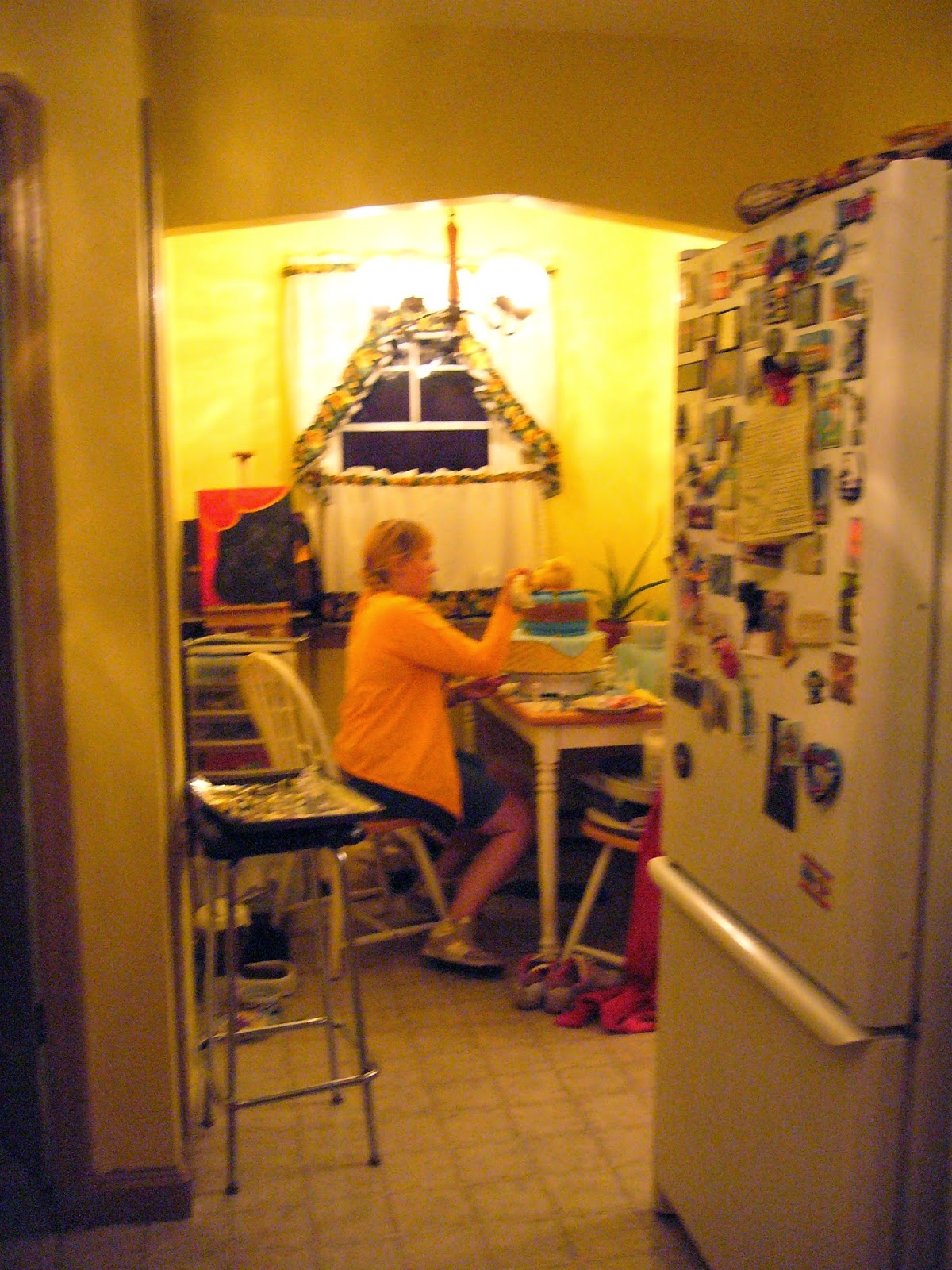 There she is on the left working on a cake in the cramped little nook with all of her stuff.  Ugh.

Well, I thought they were cute at first.  They are all from places we've travelled to.  Along with some other crap.  And I'm sick of them.  However, they are going to create a heated debate between my husband and myself...I can already tell. He loves his tacky little fridge magnets.

You can see that the giant fridge also blocks off that corner and what you can't see is that there is a door to the dining room on the other side of the fridge.  On the left side of that picture, just out of view, is the door to our laundry room.

We talked about the possibilities...from tearing down walls, to a less ambitious, but still daunting task of replacing all cupboards and flooring, and repainting.  She took note of our tastes, the way we use our kitchen, and she took a lot of measurements before she went on her way to come up with some ideas.  In the meantime, we've been visiting Home Depot and Lumberworld and speciality counter top shops, gathering catalogues and realizing how little we do know.  Yikes.

The time line will be as follows:  once we decide what we want done, the cupboards, etc., are ordered.  They usually take about 6-8 weeks to arrive.  A contractor will look at areas that have to be torn out or adjusted, such as that area just above the cupboards, which would have to be removed.  He'll be looking for support beams, or other things in order to decide if the changes can be made.

About two or three days before the new cupboards arrive, the tearing down of the old stuff begins. It means about two or three weeks with no kitchen.  If all goes well :-|  Amy said that a lot of people have their kitchens renovated in the summer, because they can use barbeques, etc., to cook some meals in the meantime.  By the time we get going on this, it probably will be summer anyway.

As our kitchen goes through the renovation process, I will post our experiences here.  Wish us good luck!
Posted by IreneJ at 8:32 AM