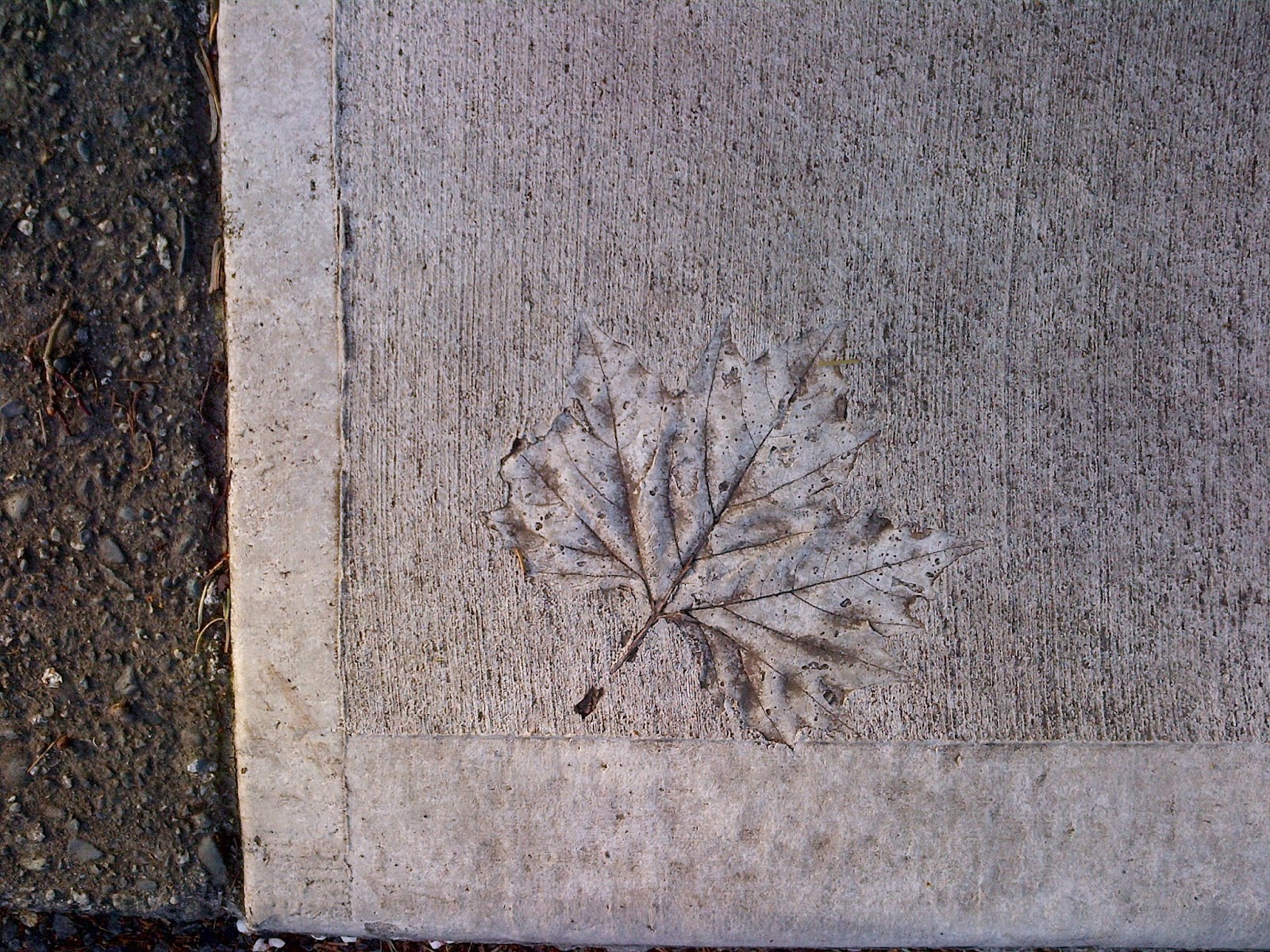 “If you want me again look for me under your boot soles.” ― Walt Whitman, Leaves of Grass

About two weeks ago, I was walking along my usual route when I spotted an impression of a leaf in a fairly new section of a concrete side walk.  I kept walking and started thinking about that image and how it got there.  Did the leaf just fall onto the side walk at the perfect time and leave its mark? Did someone come along and deliberately press the leaf into the still-wet concrete?  The image here is not that leaf, by the way.

I thought about it and thought about it, and the very next day when I went on that walk again, I decided to take a picture of it.  But I couldn't find it.  I looked and looked in the area where I thought the leaf was, and just couldn't see it.  I wondered if I had imagined it?  But I really didn't think so. Every day I walked in that area, I searched for that leaf impression, but it seemed to have disappeared.

The leaf in the picture above was one I found later on another part of my walk.  I think it's too perfect to have been a natural occurrence, and was probably deliberately pressed into the concrete by somebody.

When I found the first leaf, however, it got me to thinking about the legacies we leave behind in life, intentionally or not.  When famous film stars die, they leave behind all of their work and we can watch them again and again as if they were still here.  The same is true for family members;  we can watch old videos or look at pictures of them, or we can read the words they left behind in the form of memoirs, like the ones my Dad and my Grandfather wrote.

Historical public figures are immortalized by the changes they made in the world or in their countries, the journeys they took, and the way they lived or died.  I'm reminded of one of the stories we heard when we were in Hawaii, about Captain Cook and his impact on the Hawaiian people.  First, they thought he was a god, then...not so much.  But a monument still sits in Kealakekua Bay to remind all of his visit and of his death there.  On the same voyage that he explored Hawaii, Captain Cook also explored the area where I live, Vancouver Island, so you'll find signs of his being here too like the street I used to live on, Cook Street.

The rest of us who are less famous also like to mark the places where significant events happened.  For instance, you often see little memorials on the side of the road if someone was killed there, flowers and teddy bears, maybe a cross, and notes of sorrow.  Sometimes people are immortalized by having their name inscribed on a metal plate on a park bench.  Graffiti has been around since I was a kid and probably before that;  who doesn't remember seeing "Grads of '75", or whatever year you graduated high school, spray painted on a bridge overpass somewhere?  Or maybe you carved your initials along with the initials of someone you had a crush on, inside a heart on a tree trunk to confess your undying love.

On that same trip to the Big Island of Hawaii, I noticed quite a few instances of what I call "White Rock Graffiti", as in this picture: 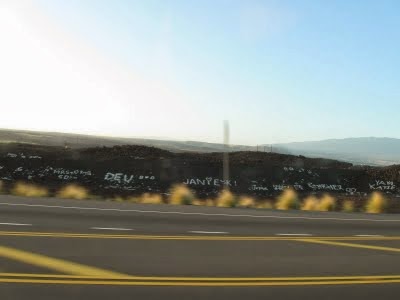 People use white rocks, some of them coral, to "write" messages on the black lava beds, usually along the highway or other roadways;  a seemingly harmless thing to do.  But at the official parks on the Big Island this type of graffiti is discouraged because it's considered disrespectful, and now there are community efforts to actually clean up these messages little by little.  As far as I can see, they've got a lot of work ahead of them! When I started to think about it more, the messages began to appear more self-serving than cute, and in fact became kind of ugly.

Many people talk about leaving a legacy behind, whether it's their art, their writings or some kind of work they've done.  Sometimes people will imply that their only real legacy is the children they leave behind, or the money those children inherit, which, by the way, is the first definition of "legacy" :-)

The internet brings a whole new dimension to legacies.  When I die, assuming that I continue to write here until that point, how long will this blog remain? What about my Facebook page?  It's kind of eerie to see the Facebook page, still remaining, of someone I knew who passed away;  to see the words he typed and the pictures he posted. Facebook does give family members the option of removing the page, or "memorialising" it, whatever that means.  There is a kind of strangeness to it, but it is another form of a legacy.

Looking at that leaf, the first one I spotted, reminded me again of impermanence.  The only sign that the leaf once existed was the impression it left in the side walk.  And even that will one day disappear, either by wear and tear or when the side walk is removed or damaged in some other way.  The words I write here will become less and less relevant (not that they are that relevant to begin with!) and the only people who will care will be my grandchildren and great-grandchildren.  I will become a face in a picture and a name attached to that face, and the essence of me will slowly disappear just like that concrete leaf impression.

I like to think, though, that rather than physically disappearing, I will simply go back to where I sprouted from, returning to the circle of life that will nurture those who come after me.  There's no greater legacy than that.

“I had an inheritance from my father,
It was the moon and the sun.
And though I roam all over the world,
The spending of it’s never done.” ― Ernest Hemingway, For Whom the Bell Tolls
Posted by IreneJ at 11:35 AM