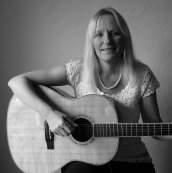 I had a strange experience recently. I won't go into detail, but suffice it to say that a new student, whom I had already had a consultation with the week before, came for one lesson and decided that I made her feel really uncomfortable. It's a strange experience for me because in twenty-six years of teaching, I've never had anyone say that. It ate away at me for days as I tried to go over the lesson we had in my head and figure out what I had done wrong.

There is a real joy for me in teaching guitar, but I admit it took me awhile to be any good at it. That's probably true for most teachers, and I suppose some never really get any good at it! I mean, all of us remember the good teachers we had in school, and the not so good ones. Teaching goes beyond "knowing" something, and that's the real secret.

My first experience with teaching was nothing to do with music at all. I was a computer operator (that's what they called us in the 80s!) at the Vancouver Public Library, and over the period that we became automated, I had to teach a lot of the staff how to use a computer. Many of these people were librarians who were older and who had barely even heard the word computer, let alone used one! I had a knack for teaching, and out of our little group of computer operators, my boss gave me most of the teaching duties. I really enjoyed it. I created a bit of a patter, complete with jokes and quips, and I slowly and carefully, and joyously, brought those librarians into the digital age. It was very satisfying.

Teaching guitar was simply an idea that came to me in a daydream. I realized that I could take what I had learned through teaching at the library and teach guitar instead.  And that if it went well enough, I could quit my part-time job in radio and teach at home so I didn't have to keep my girls in daycare. I first taught through the city in one of those community centre programmes. I wrote up a proposal for teaching an adult guitar class and they accepted it. A lot of students signed up, which was great, but then I realized the disadvantage. There were really too many of them, and I had never taught guitar before, so I didn't know how to make sure they were all getting something out of it. I'm sure some of them had fun, but knowing what I know now, I'm convinced that some did not benefit much from the class.

A year or two after that, I began teaching out of my own home through a smaller non-profit organization, and eventually I simply became self-employed. I tell my students now that I didn't really learn to play guitar until I'd been teaching it for awhile! But mostly, I learned how to teach.

These days, a lot of students come to me after having either tried to teach themselves, or having a friend or a family member try to teach them, and they blame themselves for not being able to learn in those situations. The truth is that we all learn differently, and just because your brother can pick up a guitar and teach himself, doesn't mean he can teach you!

Teaching, for me, is about making a connection with a person and then learning how to communicate with them what they need to do. Some people learn more visually, others learn more by ear, and for many it's a combination of things that lead to understanding how to do it. Not only that, but playing an instrument is a physical experience, and for many, holding it for the first few times feels completely foreign. Then there are the sore fingers and strange hand cramps that come with creating those strange little chord shapes at first.

My job, besides the instruction part, is to give a lot of positive encouragement. Some people are very nervous, most are self-deprecating, but there are those who are particularly hard on themselves or impatient at not being able to learn more quickly. Interestingly enough, most kids are not that way. Kids are used to the idea of learning, and they generally don't care as much about making mistakes, so most of them just plow through and do their best. But as adults, we have different, and higher, expectations of ourselves. We just want to be able to pick it up and play, and although there are those who can do exactly that, it's the exception rather than the rule.  And how we squirm at the idea of making a "bad noise"!

A lot of people talk about how nervous they feel, and I completely understand that. A few years ago, I took an adult piano class for the first time, and it was really good for me to be the student for awhile, and to experience that nervousness and "feeling stupid"! I try to remember that feeling every time a student expresses his or her anxiety. The most extreme case happened many years ago, when I had a student who would not play in front of me. She simply asked me to show her how to play something, and then she'd go home and apparently play it herself. I say "apparently" because I never once heard her play! She only took lessons for a short while because even our arrangement made her too anxious. So when a students tells me about their anxiety, I can relate that story as a way of hopefully make them feel like it's not so bad!

I've been told that one of my strengths is my easy going nature, and my emphasis has always been on having fun with playing. There is nothing more satisfying than when I see a student have an "aha!" moment...when they see their playing improve or when their fingers suddenly "know" what they're doing.  But if you're not having fun with it at least some of the time, then learning the guitar isn't worth it as far as I'm concerned!  I always try to meet people first to see if we're a good fit, and I encourage people to do that with anyone they are looking at as a prospective teacher. I don't teach classical or jazz or theory, so there's no point in taking on a student who is interested in that. But it's also about the personality and teaching style. I've heard a few stories over the years about other teachers to know that some of them don't really know what they're doing.  If you want to teach, then learn how to!

I'm lucky that what I teach is something that makes people feel good. And I never stop learning. Even my recent experience will still be a lesson to me, something that will make me even more conscious and sensitive to the people who give me the great pleasure of teaching them.