It Was The Best Of Signs... 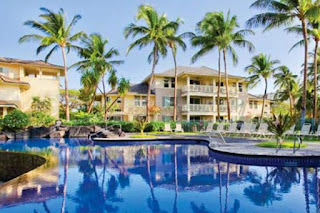 We live on an island. Vancouver Island. It's a beautiful place to live with a very moderate climate, but in the winter it can be kind of grey and glum. Which is why we have, on many occasions, chosen to visit another island. Hawaii. Simple enough, eh?

I prepared myself by packing a week early, painting my toenails, and loading up movies on my digital paraphernalia. Don't forget your passport! Remember your meds. Put the garbage out. Water the plants. Whoops. Too much cream left in the fridge...it's going to go bad before we get back. Oh well, it's only cream. Hawaii here we come!

We were flying out on Sunday afternoon, with our first flight out of Victoria to Vancouver, a two hour turnaround and then the six hour flight to Kailua/Kona that evening. My daughter drove us to the airport. On that drive were the first signs of snowflakes, not a very common sight here in Victoria, but then, so what? What's a few flakes?

She dropped us off, we said our goodbyes, and we walked right to security where there was a short line up. The security guy was in a good mood, joking as he helped us throw our suitcases and backpacks into the bins. My husband went through security and immediately set the alarm off. It's always his belt. He forgets to take off his belt.

After a full body scan, he was cleared and we began the long "hurry up and wait" for our flight. Outside the big windows in the departure area, it was starting to look a little more ominous. The snow had picked up and was accumulating quickly. We kept checking our flight time, but it continued to say "on time". A flight came in. That was a good sign. Always look for the good signs. Eventually, an announcement came on saying that our flight was delayed about 20 minutes. I walked up to the Westjet agent and she assured me that we would make it in time for our Kona flight. So we sat some more. The weather worsened by the minute. I looked up the gate we needed to be at when we arrived in Vancouver. It was a long walk. Maybe they'll be delayed too. But so far, that flight was indicated as on time. 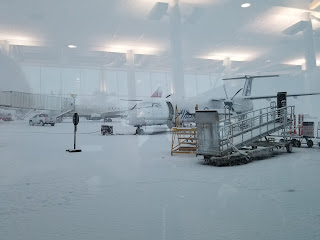 I took a picture outside the airport window and posted it on Facebook with the caption "Yeah, we're not going anywhere anytime soon!" And sure enough, within about a half hour of the taking of this photo, the flight was cancelled. It's a smaller airport with mostly smaller planes and the manpower and equipment could not keep up with the snowfall. Add that to the fact that Victoria rarely gets more than a sprinkle of snow at a time, and you've got a calamity.

After the initial shock, I called our daughter and asked if she could come back and pick us up. It was getting dark and she had never driven in snow like this before, so she hesitated. But like a trooper, she said she'd come, so we parked ourselves by the arrivals section of the airport to look out for her. My husband was on the phone calling Westjet to see if we could re-schedule our flights for the next day, and I ended up on the phone with our daughter, talking her through the drive through snow storm. By this time, it was completely dark and there were white out conditions on the highway. She was driving ever-so-slowly and watching as people abandoned their cars on the side of the road. She got lost approaching the airport because she wasn't able to see the road signs. But she finally made it.

By this time, they had actually shut down part of the highway because a whole slew of cars without snow tires were unable to negotiate one of the bigger hills, and were stuck there, creating a mass traffic jam. So before we got too far along, we were diverted by police off the highway and onto a back road route. Most people were driving slow and steady, but the ones who had no idea what they were doing made it worse for everyone else. We had four wheel drive but even that was a bare advantage. Spinning tires, stuck trucks, buses that couldn't negotiate corners, they were all there, one after the other, after the other. It took us close to two hours to get home in what would have normally been a half hour trip, if that.

At home we determined that it would be better the next day.

The next morning, I was surprised to wake up in my home, until it hit me. Oh, yeah. We're not there. Yet. I looked for signs that it was going to happen. Flights had been taking off that morning. Good sign. Snow wouldn't start until later that afternoon. Another good sign. We could fly out before then.

We decided to drive ourselves this time and park at the airport to spare our daughter from another frightful experience. I checked the flight status every two minutes while we drove. Still on time. Still on time. Good sign. I realized I brought the wrong eye glasses. Oh, oh.

My husband drove up to the parking ticket machine. Struggling to press the button from the inside of the car, he swore and opened the door. The ticket got stuck. He had to use a pen to dig it out. When he finally got it, the gate wouldn't lift. Some more profanities (could've come from me) and I told him to press for another ticket. This time it came through properly and the gate lifted. Phew! Was that a good sign or a bad sign?

We sat in the same area of the departure lounge as we had the day before. We recognized a couple of other passengers who has returned as well. It hadn't snowed much during the morning and we were hopeful that this time the plane would actually get out. And it did. 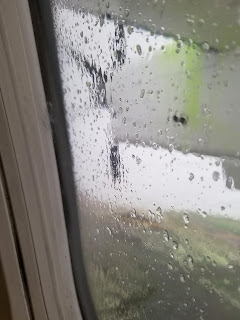 Well, we left the gate. The plane was being de-iced and we were ready for take off as the snow picked up. I felt nervous about the length of time it was taking, but finally the propellers started up and the plane was readied. We sat. And sat. And then, to our and every other passenger's horror, the propellers wound down and came to a stop. Oh no.

The pilot came on the loudspeaker. The visibility was becoming so poor that they could not see the runway or the markers. But they were talking to "control" and were working out a solution.

We sat some more.

Every now and then the pilot would come on and say they were working on it. There was still hope.

They served us water and pretzels. Was that a good sign? 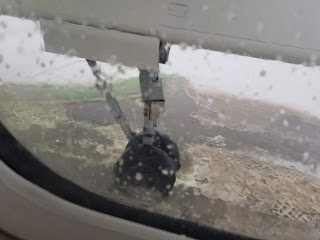 In all of the times the pilot came on the loudspeaker, not once did he say that the flight was cancelled. We clung to this. Finally, the pilot announced that a truck was going to tow us back to the gate, but we were still not cancelled. He said it would be warmer and more comfortable sitting in the lounge.

We started rolling. And then.

The truck pulling the plane got stuck, the pilot announced. On came the propellers again. Maybe we're going now? No. The pilot was just using the propellers to propel us (duh) back to the gate. We disembarked.

It wasn't until we were inside, sitting down in the lounge, that the announcement came that the flight was cancelled. Ugh.

So once again, we made our way out of the airport, this time to the parking lot. Most cars had been there awhile and were swamped in snow. We were mostly concerned about getting out of our stall. 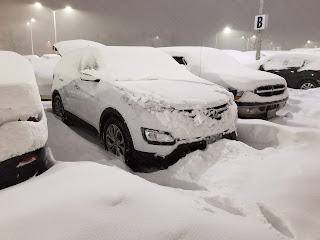 We got word that the highway home was now almost completely shut down. By this time, there were 11 accidents all along it, so we had to take another route out of the airport. The back road was treacherous. Of the few who were on the road, or what we could see of it, most, like us, were driving at a snail's pace. Again, we came across a number of stuck vehicles, and people with shovels trying to dig them out. I kept my eye on Google Maps (thank heavens for Google Maps!) and saw where the highway had opened up again. Even the highway was bad, the plows not having had enough time to do a proper job. We slowly made our way back home. 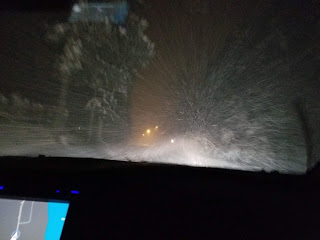 From home we called Westjet again and I cancelled the rental car. There was still room on the next day's flights. Third time lucky? We took the chance and booked it.

The next morning,the weather was better, flights had been leaving and we were SURE this time would be it. Others told us to consider taking the ferry and public transport instead. We seriously considered all our options. In the end, because the weather was in our favour, we went with the flight. We counted 12 cars abandoned along the highway on our drive there. People were shoveling while they had the chance.

We joked with the security guy that this was our third and hopefully our last time through there. My husband remembered to take his belt off. I brought the right eye glasses. We sat in a different area of the departure lounge. This was a new day!

We spoke to others there who had also spend two or three days trying to get out. One man had no option but to leave, even knowing has connecting flight had left an hour before. We weren't the only ones with tragic travel tales. The monitor showed our flight as on time. Yay! Then I got an odd email that the flight was delayed 40 minutes. But the screens at the airport still said on time. We decided to go with that. Planes were coming and going, even though there was the occasional cancellation or delay. We were going to make it! I know my friends have been waiting to hear if we did or not. I'll give you a hint:


Nope. We are at home. This time the flight got delayed in Vancouver. What was originally a 20 minute delay, turned to 40 minutes, then 50. The last I heard, the plane didn't get out of Victoria until 6 hours after it was scheduled. They couldn't get us another flight out until two days later, which would have meant our trip was half over by the time we got there. So with heavy hearts, we drove home one last time. I unpacked my backpack, but I haven't had the heart to unpack the suitcase. We might try to take a few days up island to a resort with sandy/snowy beaches and a cold, grey ocean view. At least it's something!

When we were driving home the last time, I saw an ambulance blazing by, sirens roaring, and thought to myself "Someone's having a worse day than me." You have to put it in perspective I guess.

But I don't recommend stepping in snow with bare feet.

Posted by IreneJ at 2:00 PM 2 comments: Links to this post