What's In A Name: Searching For Johannes Jokumsen

A few weeks ago, I visited Ellis Island in New York, where some of my Danish relatives had passed through on their way to a "new land" in the early 1900's. My mother's side of the family, the Corfixsens, only stayed in New York for a few years, long enough for my Uncle Roy, Aunt May and Uncle Ernest to be born there, before going all the way back to Denmark. When you think of it, travelling across the Atlantic in the early 1900's must have been a HUGE undertaking, let alone doing it twice! I can't imagine why, but back to Denmark they went.

[Update: I have since learned from my Danish cousin that my Grandmother Corfixsen was only 16 when she traveled New York the first time by herself, beating my Grandfather's record! She met my Grandfather there, although I don't know his story, yet! They got married, had three children, and because my Grandmother missed her family in Denmark so much, they traveled back.]

My Grandfather on my father's side, Johannes Jokumsen, who I knew as John Jackson, traveled through Ellis Island New York too, all by his lonesome at the tender age of 17. His adventure began when an aunt and uncle who lived in Kalispel, Montana  suggested that my great-grandparents send their "smartest" kid to be educated in the U.S. Out of 12 children, my grandfather was considered to be that kid. I imagine his aunt and uncle must have been well off, because they sent the money for the fare for my Grandfather's trip to America.

He came aboard the steamship Hellig Olav, or the "Holy Oly" as the ship was nicknamed, because it was, as my Dad put it, a bit of a "rust bucket". And that's what was especially remarkable about my grandfather's trip. It was April 15th, 1912 when another, much more famous ship, the Titanic, met its end in the chilly Atlantic.

On April 18th, 1912, three days later, my grandfather saw the Titanic's lifeboats in New York Harbour as the Hellig Olav sailed in. Imagine that! Needless to say, I have great respect for the Holy Oly!

Here is a copy of the ship's record for Grandad: 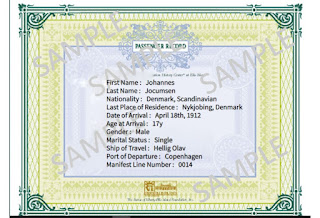 You can see that they misspelled his last name, Jokumsen, as Jocumsen. This was a very common occurrence on Ellis Island. Can you imagine having to try to come up with English spellings for all of the foreign names? It must have been a nightmare!

Once my grandfather was processed, he managed to find his way to the train that took him to Kalispel. He had no money for food for the train trip, all he had was a bag of apples to sustain him. Nevertheless, he arrived safely at his destination.

But the adventure, 6 weeks on a boat by himself across the Atlantic to a foreign country, was all in vain.

My grandfather, as it turned out, didn't get along with his aunt and uncle. So he stayed long enough to work to pay them back the fare, and then left on his own again, back on the train. But instead of going back to Denmark, he became a kind of a hobo, jumping from train to train, travelling through the states, working long enough somewhere to save a few pennies, and then off again.

Eventually he crossed the border into Canada. We figure it might have been because he was about to be drafted into the U.S. army, and being a pacifist, Grandad was not going to fight for any country! After some time in Canada, he went back to Denmark, much to the surprise of his parents, who had not heard from him in all that time and thought he must be dead. In Denmark, Grandad met and married my Grandmother, Else, and somehow convinced her to come back to Canada with him, where they started a whole new adventure together. But that's for another story!

At some point, although I'm not exactly sure when, Grandad decided to simplify things and began calling himself John Jackson. He didn't bother to go through a legal process to change his name at the time because, well, nobody did! My father, my grandparent's first born, was also named John, although they referred to him by his middle name, Arvid in the early years of his life. Dad's birth certificate had his parent's legal name, Jokumsen on it, but my Dad was known all of his life as John Jackson too. This only became a nightmare the first time he tried to get a Canadian passport. He had to go through quite a process to get his name legally changed to Jackson, but eventually it was all settled.

His father, my grandfather Johannes Jokumsen, who became John Jackson, after a good life, died in Vancouver in 1985 at almost 90 years of age.

In the early 2000's, I decided to check out the Ellis Island website, where they had the ship's records of just about every immigrant who had passed through. At first I couldn't find Grandad's record but after several different spelling attempts, I did, and ordered a copy of it to give it to his son, my Dad, as a gift for his 80th birthday.

In 2008, I visited Ellis Island for the first time on a trip to New York with my husband and daughter. Outside the Ellis Island museum is something called The American Immigrant Wall of Honor, where you can find the names of all of the immigrants who came through. I searched for Grandad's name when we were there, but couldn't find it. I convinced myself that it must have been because of the misspelling of his name and vowed that one day I'd go back and check  again.

So when my husband and I and our good friends flew to New York just a few weeks ago, one of the first things I did was to book a tour of the Statue of Liberty and Ellis Island. On our second day in New York we set out for Battery Park to find the boat, for a rain-soaked trip to Liberty Island. After hanging out in the Liberty Museum, trying to dry out just a little, we got on another boat to Ellis Island and the Ellis Island Museum. 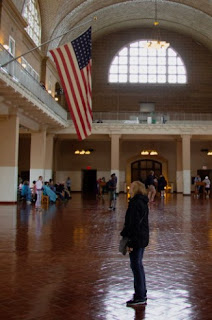 Entering the main building, I was overwhelmed to see the place that my grandfather landed at only 17 years of age, along with so many other immigrants.

The main building is beautiful now, but back when my Grandfather came through, it was full of benches crammed with people waiting to be processed . There were approximately 12 million immigrants who came through Ellis Island between 1892 and 1954. 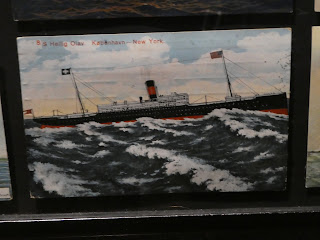 Eventually, I found a postcard of the Hellig Olav on a wall in the museum. There were postcards from many of the ships that brought people over the Atlantic to the U.S. over the years.

In doing some research online, I found some other old photos of the Hellig Olav:


But the most important part of the visit for me was to find my grandfather's name on the American  Immigrant Wall Of Honor. It was still raining, when my friend and I went outside to the wall and I started looking. I did find a Fred and Anna Jochumsen, a similar spelling of the name, but, alas, no Johannes Jokumsen or Jocumsen. 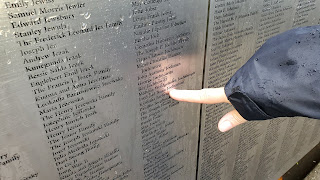 Then I found out that the wall wasn't meant to be a complete collection of names, but just a sampling of those who passed through. Of course, that makes sense. It's a huge wall, but still not large enough to fit 12 million names. In the end, I did find this name: 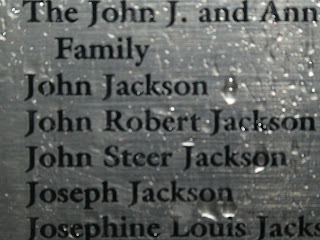 ...and that was enough for me. The likelihood is that I will not go back to Ellis Island again, but it was emotional for me to be in the place where my Grandfather's adventure began. You start thinking about the "what if's". What if he had actually gotten along with his aunt and uncle and stayed in the U.S. for his education? What if he ended up in the U.S. Army?

And what if he hadn't actually been the smartest kid? What would he have done with his life?

Grandad, I thank you for sending me on my own adventure to find Johannes. In the end, by being in the same place that you were, and understanding what it must have been like for you to go through that, I think I may have succeeded.


Posted by IreneJ at 3:59 PM No comments: Links to this post