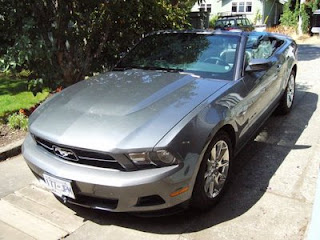 I hate it when you book a rental vehicle and part of the contract says "or similar". There is nothing "similar" in my mind, to a Mustang. And I was ready to put up a fight..."If you don't have a Mustang waiting for me, I'm NOT GOING." Yeah, like that would shake their rattle.

Fortunately, there were two of them in the lot, both silver/grey, when we got there, so we knew we were on our way :D.  So Gracie and I head out tomorrow morning on our birthday trip to the Okanagan.

It took us awhile to figure out a few things about the car. We didn't know how to open the trunk. Well, you can't go on a vacation without a trunk, so we had to mess around with a few buttons until Gracie exclaimed "Oh, HERE it is...". Thank goodness. The other thing was the sound system. You have to understand that weeks ago we sat up until 2am finding songs that we wanted to have playing in the car on the trip. Sitting up until 2am is a HUGE sacrifice, a COMPLETE change in behaviour for me. I know. I'm old.

We came up with over 4 hours of music that Gracie dutifully loaded on her iPod Touch. But for the life of us, we couldn't figure out how to plug it in. We decided that we could take her new dock, and play the music from that, but it was still a bit of a sacrifice since the 'stang has SUCH a nice audio system. I mean, it's a $65,000 car, it must have an audio jack at least! Well, it was sitting in the driveway and we decided we just wanted to sit in it and smell the leather. And Gracie, once again, started poking around and found the jack. YES! With a little fussing and mussing, we got it going...she hit the play button on her iPod and out came... "She's a brick (da, da, dah, da) HOUSE (da, da, dah, da) She's mighty, mighty Just lettin' it ALL hang out..."

Ah. It's going to be a good trip.
IJ
Posted by IreneJ at 5:48 PM No comments: Links to this post

Image by char1iej via Flickr
"A Buick?" I thought to myself as the Budget Rent-A-Car attendant led me out to the parking lot. "I don't even know what a Buick looks like." It didn't take long for me to decide that I was NOT going to drive a Buick from Victoria to Calgary. I felt about a foot tall sitting in the front seat, it was too big and not the least bit comfortable for such a long trip.

It was the early summer of 2004 and I was about to drive my newly-graduated, eldest daughter and her friend to Calgary so that they could visit friends and hang out at the fairgrounds of the Calgary Stampede. Me, I was going to visit my brother and get a taste of Alberta for the first time since I was six years old. But a Buick wasn't going to cut it.

The attendant anxiously looked around at the other options in the parking lot. I just wanted a basic compact car, but the model I had set my heart on wasn't there. My eyes glanced past the two Mustang convertibles...too much car for me. It was suggested that maybe I might like an SUV, but a gas guzzler wasn't my cup of tea either. Then my eyes glanced back at the two Mustangs; a silver-grey one and a candy-apple red one. Hmmm. "How about a convertible?" the attendant asked, noticing my pondering. I hesitated for just a moment. And then I took the plunge. "Okay, let's go for the Mustang." My daughter's jaw dropped to the floor. "Mom!" she squealed, "We're getting a Mustang??"

When I drove that candy-apple beauty out of the parking lot, I was half excited and half terrified; it practically jumped out from under me the first time I hit the gas. I'd been driving a '97 Ford Aerostar for the last few years...a slug of a thing compared to this. But as I got used to its abilities, the Mustang started to feel a whole lot better, and suddenly I found myself smiling and imagining the looks of others. Yeah, jealous, eh? I smiled. And that was when I fell in love with a Mustang.

It wasn't until 2007, my 50th birthday, when I took the plunge again and rented another one. By this time, the model was new and the body was different, and although I had been promised a candy-apple red one, they only had one that was kind of an orange colour. At first I wasn't happy with the colour, but when a kid with his bike on the corner of a street I was turning onto yelled "Nice car!", I was hooked once again. Yeah, nice car. I picked up one of my friends to play golf in it a couple of days later. Golf clubs don't exactly fit in the trunk of a Mustang, so we had our clubs propped up in the back seat with the top down.

After the game we drove through a road check with several young police officers standing around. "Had anything to drink tonight?" one officer asked. "Nope", I truthfully replied. "Say, what do you call this colour?" he asked, referring to the car. "I call it Cheez Whiz," I smiled. The rest of the young cops started eyeing us and began hooting as we drove away. They were probably hooting at the car, but oh well. It was one of the best moments of my life :-)

This summer, my youngest daughter turns 21. I turn 52, which doesn't seem a significant age, except for the fact that my mother passed away just a short while after her 52nd birthday, so it has meaning for me. Funny how we measure things like that. I know of several people who've had parents who passed away early, and they all seem to have thought it quite a victory to have made it past the same age. My mother died of Hodgkin's disease, a cancer of the lymph nodes. Only a couple of years ago, I found out that it is not an inherited type of cancer, but for all of those years after she died, I wondered if I would go the same way. I guess I still do.

But unless I get hit by a truck in the next while, it looks like I am going to surpass her age. And that is why my daughter and I are renting a Mustang to drive off to the Okanagan for a few days. It's a kind of victory lap for both of us for different reasons. We pick the car up on her birthday and take it back the day after mine. My good friends, knowing well my obsession with Mustangs, often try to convince me that I should just go out and buy one. With my husband recently laid off and the instability of the economy, I'd be nuts to right now, but I've certainly thought about it.

Then again, maybe the joy of driving one that I owned would eventually wear off and it would just be "the car".

But somehow, I can't imagine that a Mustang will ever be just another car to me. :D

Posted by IreneJ at 6:45 AM 4 comments: Links to this post 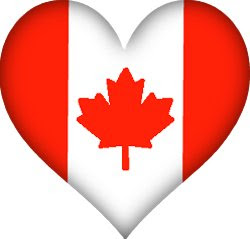 I spent Canada Day at the mall. But I had on my Canada Day shirt, not a t-shirt but a shirt actually sewn by my daughter, white maple leafs on a red background, and I wore it proudly. There were a few people at the mall in red and white, but not many. You have to go to the events to really see them...I know that from experience.

Normally I go to Fort Rodd Hill, a historical part of Vancouver Island, where there are ceremonies with representatives from all levels of government, a 21-gun salute and lots of birthday cake and activities. But this year I was sans my partner, so I ended up at the mall instead, doing some shopping for an upcoming family wedding.

To tell you the truth, my favourite part of Canada Day is not the local celebrations or the barbeque or the cold beers and flag waving. It's watching new Canadians receiving their citizenship. My family are all immigrants one or two generations back, the nearest one to me being my mother, who became a proud Canadian in the 1950's. She immigrated from Denmark after the Korean War, and decided that she loved Canada so much that she wanted to stay here.

She often joked that she knew more about Canada than Canadians did because she had to go through some rigorous testing on her knowledge of Canadian history and politics before she could get her papers. She was proud, very proud of her adopted country, and she worked hard to learn the language and remove her Danish accent. When I see families who have come from other countries under very difficult political or socio-economic circumstances, choosing this country because they know that they can make a better life...well, I tear up pretty good.

They know the truth about how good we have it here much better than we do. It's easy to take it for granted when all we have known is freedom and opportunity. There are a lot of young people right now who could learn a lot by spending a month or two in an impoverished or politically oppressed country. I hope they grow up to learn the real value of the country they live in. Canada.

I know there are other wonderful countries in the world. But today is Canada Day, and I am unabashedly joyful and grateful to be here.