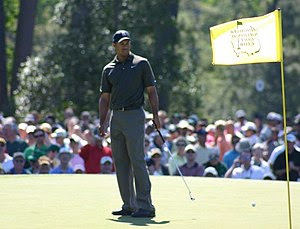 Image via WikipediaI watched a documentary on CBC's Fifth Estate the other evening called "Tiger Wood's Rise and Fall" by director Jacques Peretti.  I've seen other documentaries by this fellow, most notably one on Michael Jackson after his untimely death more than a year ago.  Peretti does have a pattern to the way he tells his stories which is compelling but maybe just a little bit tabloid.

He took us through Tiger's childhood where this kid was quite isolated and controlled by his father, a Vietnam veteran who was portrayed as fearless and full of himself and very much a womanizer.  The documentary creates an image of a young boy who had his life planned out for him even before he was born, and who never really had any other option...whether or not he wanted one.  He was kept out of the public eye when he started to play junior tournaments, protected and groomed and made to practice hours and hours on end.  At one point his only friend was a much older golf pro who was also interviewed for the documentary.

It almost felt as if Peretti was painting a portrait with his own colours, trying to create a reason for Tiger's behaviour, behaviour which was, to put it simply, just plain bad.  He was a well-groomed, gifted athlete who had, as it turned out, a seedy side.  A really seedy side, according to this documentary.  He traveled to and from tournaments with his large entourage, and in between gigs (and sometimes even during them) he would go to Vegas and sleep with countless prostitutes, sometimes all night and one after the other.

But of course, Tiger was married and had children and eventually this secret seedy side was going to come to the surface as it did in a sudden and dramatic way back when he had the accident with his SUV.

I have a good friend who was a great admirer of Tiger until all of this happened.  She decided that she couldn't forgive him and would never again watch him play or root for him.  A lot of people felt that way, while others suggested that he should be forgiven because he is human, even though his public persona made him seem pretty much god-like.

If this documentary is true, then Tiger had a very bizarre upbringing.  But then, so did Michael Jackson.  And so do countless other "stars" and athletes and people in public life.  You can't help but think it must be the weirdest thing living the way they do.  But is this lifestyle because of who they are or because of who they are taught to be?  It must be strange to have everyone willing to do anything for you; a person could easily lose sight of reality and a true sense of one's self.  The Paris Hiltons and Lindsay Lohans give us a kind of moral measuring stick to compare ourselves to, but is that really fair?  We don't live like that, we don't have more money than we know what to do with and a lifestyle that is nothing but parties, appearances, and perks.  It must be difficult sometimes for these people to know which way is up.

We, the public, are guilty of wanting to watch these train wrecks-in-the-making too.  We secretly envy their money and talents, while otherwise enjoying their eventual demise.  I watched those two documentaries with a kind of disgust, and yet I didn't turn them off either, did I?  I'm as guilty of gaping at these misunderstood misfits as they are of thinking they're above and beyond reproach.

Tiger's life will no doubt never be the same.  He'll probably find his legs and get his game back on par, pun intended :-), but most of us won't forget that he isn't the perfect spit-and-polish pro we once thought.  Don't get me wrong, I don't think he's a victim either, except maybe of our gawking stares.

And he sure can play.