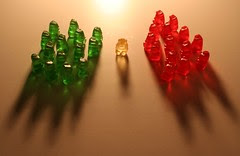 Image by furiousgeorge81 via FlickrThe term "middle way" often comes up in Buddhist teachings, reflecting a middle point between addiction to pleasure and addiction to pain. To take the middle way means finding the place between these two extremes, and it is not an easy discipline. An addiction to some kind of pleasure makes obvious sense...isn't that something we often find ourselves battling with? But addiction to pain, that isn't as obvious, but yes, probably even you have experienced feeling sorry for yourself, as I have.  That's an example of addiction to pain.

But the 'middle way' I want to talk about this time is not the Buddhist teaching, but something that has come up for me again and again over the last few years, and what was the theme of the recent Rally To Restore Sanity and/or Fear in Washington, DC. If you haven't heard about it (you haven't?), comedians Jon Stewart and Stephen Colbert held a rally on the National Mall on October 30th, which drew by some estimates, more than 200,000 people. The rally was a half-serious response to other more recent rallies held by Glen Beck, a right-winger, and Al Sharpton, a left-winger, each who were trying to draw attention to their polarized political views.  Stewart and Colbert's rally was to draw attention to the fact that the squeaky wheels from both the political left and right are getting all of the media soundbites and that MOST of the population in the US are somewhere in the political middle with no one to speak for them.

I don't expect the political wing nuts on either side are going to shut up any time soon, but the rally restored some of my faith in the American public, at least.  Of course we have similar left/right arguments and loudmouths up here in Canada too, but we hear more of that from our southern neighbours and it seems to me (I could be wrong) that the extremes are so much more 'extremer' down there. Okay, I probably am wrong.  That happens a lot.

At any rate, I have my leanings too, but even I find that there are some embarrassingly squeaky wheels on what is supposedly my side of the political spectrum.  There's a point when I want to tell them "okay that's enough of that" simply because they're making fools of themselves and not furthering "our" cause.  What is terribly sad is that many things don't get accomplished or dealt with because the arguments on either side have become so polarized to the point of being paralyzed.  Important issues become branded as "right wing" or "left wing" and nothing gets accomplished.  I'm getting really sick of all of these arguments and in-your-face insults, all of the outrageous ranting and extremism, aren't you? Omigod have you seen some of the political advertising ahead of the U.S. primaries??  Unbelievable!

So just stop it!

There, I feel better.
And to sign off (a little pun there), I'm going to leave you a list of some of the signs that were at the rally.  They were perfect!

"If you keep shouting like that, you'll get big muscles all over your face."
"More beer, less (paranoid) nuts."
"Fear Fear Itself"
"Moderately Fired Up, Relatively Ready To Go"
"Frustrated
Arizonans
Rejecting
Tea"
"If your beliefs fit on a sign, think harder."
"Is this the line for Justin Bieber tickets?"
"Lion, tigers and Muslims, oh my!"
“I might disagree with you, but I’m pretty sure neither of us is going to hell.”
"Ruly mob."
"Civil is Sexy"
"Hitler is a Nazi"
"I went to the Rally to Restore Sanity and all I got was this lousy sense of respect for other people's opinions."
There you go.  Can't we just get along, people??
IJ