Lying Liars and Their Lies

That title is a bit of a take-off on an Al Franken book called Lies (And The Lying Liars Who Tell Them), a mostly comedic look at the BS of politicians on the extreme right in the US.  I say "mostly" because he was obviously also trying to make some rather serious points somewhere in between the funny lines.

We love to catch politicians in the act of lying;  in some ways I think we even expect it.  For instance, when a person running for some kind of office begins making political promises, we pretty much expect them to break one or two of those promises when they actually win.  Most of them will site all kinds of excuses, such as the ever-changing political climate or not having known the true state of affairs until they came into power.  The list of excuses goes on, and we smugly sit back with our "I told you so" smirks.

There is a Geiko commercial featuring Abe and Mary Lincoln, when she asks him whether or not what she is wearing is making her butt look too big...he hesitates for a long while, and then...well, I'll let you see for yourselves:


Sometimes honesty can be a difficult thing!

But lying, in and of itself, is not so funny.  Children begin to the learn the art of lying at or around the age of three-and-a-half for many reasons.  Even though the behaviour is discouraged, as we all know, most of us will continue to lie, maybe only rarely for one reason or another for the rest of our lives.

On the extreme side, the Casey Anthony case in the US, aside from being a terribly sad story about the death of a little girl, was also a very public demonstration of how families can be destroyed by lies.  One Anthony family member after the other (all except Casey, of course, who never did take the stand and face up to her lies) sat in front of the courtroom and the cameras and cried in response to the lies and deception covering up the death of little Cayley.  And because no one was telling the truth it seems, especially Casey, we'll never know how that little girl died and why.

So why do we lie?  There are many reasons we might be tempted to;  to save face, to protect ourselves or protect someone else, and sometimes it's simply because we don't want to hurt an other's feelings.  Is there any occasion where it might be considered okay to lie?  That's something none of us can really answer with any confidence.  Trust between two people is a very fragile thing;  it takes only one little lie to destroy trust and often months or even years to build it back again.  I have been on both sides of that equation, and neither is a very nice place to be.  Most of us hopefully learn from those experiences.  But if you've ever been in any kind of relationship with a habitual liar, someone who either can't help themselves or simply won't stop, you know how terribly destructive lying can be.

An interesting phrase I learned a few years back is "lying by omission".  Sometimes we will use the excuse that we didn't actually lie because we didn't say anything.  But leaving out information, especially important information, is also a form of lying.  That bit of information can often make the whole difference and change the entire scope of a story and we know it!

Yep, we KNOW when we're lying; we know when we're twisting the facts just a little in our favour or leaving out certain information.  The most difficult thing is learning to be honest with ourselves first...that little voice in our heads can often make all kinds of excuses for us to make us feel better, but ultimately, as they say, the truth will set us free.  Learning to look at ourselves in the mirror is the first step and we can't possibly expect others in our lives to be upfront and truthful if we ourselves are not.

Lastly, how do we deal with the people in our lives who we know are habitually lying to us?  I have had a couple of relationships like that, and I know that you probably have had at one time or another too.  Do we give up on these people?  Do we try to make them face themselves, or do we simply hope that one day they'll see the error of their ways on their own?  When you sit there with that sick feeling in the pit of your stomach telling you you've been deceived yet again, you can't help but beat yourself up for continuing a relationship with that person in the first place.  But I can also see why people stick with their husband's or wives, for example, in spite of the lies that are buried in the back yard.  Love is a powerful and forgiving thing, and if there wasn't love to begin with, the decision would be obvious.

To forgive, or to let go...if I ever find a definitive answer to that one, I will honestly let you know.  In the meantime, I vow to continue working on myself because I know that the best teacher is by example.

Posted by IreneJ at 10:23 AM No comments: Links to this post 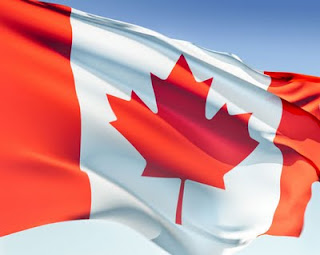 I remember my mother telling me all about becoming a Canadian citizen back in the 1950's with great pride.  She worked hard at overcoming her Danish accent and learned to read and write in English, answering all of the questions on her citizen test correctly.  She told me that she likely knew more about Canada than many Canadian born citizens did, and I think she was probably right.

There were a lot of other Danes who emigrated from Denmark to Canada or the US back then, and also when my Grandfather on my father's side did in 1912.  He was just a teenager when his parents sent him to the U.S. to be educated, sponsored by his rich aunt and uncle.  My grandfather didn't like his aunt and uncle much, so he left and travelled all over the U.S. before finally coming to Canada.  He must have liked it here because he went back to fetch and marry my Grandmother, and they both came back to Canada to live permanently.  Either that or he was avoiding conscription in the U.S. :-).

I remember clearly Canada's Centennial in 1967.  There were songs and celebrations everywhere,  including my back yard.  Expo '67 was in full swing in Montreal, so I decided to create a mini expo in my back yard that summer, complete with mini pavillions and flags from different countries.  In school we sang the Centennial Song, "Ca-a-a-n-a-a-d-a-a (one little, two little, three Canadians)...we-ee-ee-ee love thee (now there are 20 million)".  I think this was the first time that I became aware of my citizenry and felt real pride in being Canadian.  Holy cow, that was 44 years ago.

As an older, and perhaps more cynical Canadian now, there are some directions we've taken as a country in the past few years that I don't agree with, three that stand out in particular.  In no particular order, the first has to do with our Canadian Armed Forces;  we used to have the reputation of being peacekeepers and I was always proud of that fact.  But it seems that since the Somalia Affair, where Canadian soldiers created a scandal when they beat a teenage Somalian to death and posed for pictures with him, things have gone downhill.  I have a nephew in the forces who has been to Afghanistan several times, and I don't know how I feel about that either.  I certainly support him, but I'm not sure what purpose it has served for all of them to risk their lives in that place.  And with all of the unrest in Arab countries, I don't know that I like the idea of Canadian soldiers being deployed to "protect" citizens of those countries if it means dropping bombs and firing bullets.  What's so peacekeeping about that?

The second direction we've gone in lately that doesn't please me has to do with our environment.  We are a country of abundant natural resources, but I think we can find a way to make use of them without destroying everything else in the process.  Environment should not be trumped by commerce.  Our government doesn't want to clamp down on industries that pollute and it doesn't appear to want to support green initiatives (which I think is the only way of the future), unless it makes them look good, or unless they are obliged to.

Now don't get me wrong, I am not a diehard tree hugger, but I am practical!  Doesn't it make sense that if you spend all you have, there's nothing left?  If there are companies and industries out there who know how to do what they do without making a mess, shouldn't we do everything to encourage them?   For Pete's sake, it's pure ignorance and stupidity not to!

The last thing that concerns me is an attitude that is spreading about immigrants.  Because of this "war on terror" state of mind we've been subjected to in the last few years, there are more and more Canadians who want to pretty much close our borders, if not completely, then to anyone who looks or acts like they might strap a bomb to themselves and push the button.  We have been brainwashed to think that immigrants are potential enemies.  What kind of attitude is that?  We are a country of immigrants, the majority of them wanting to live here because they think Canada is a wonderful place to plant roots.   And because our birthrate is not high, we actually DEPEND on the influx of immigrants to build our numbers and add to the tax base.  So come on, people, let's stop with the paranoia.  Most of us wouldn't even be here if it weren't for our immigrant ancestors.

There is no perfect country, but where I live comes pretty close.  I'm biased, of course :-).  A country isn't a static thing, it is always a work in progress, and I think we stand out best when we demonstrate our peaceful, respectful side to the rest of the world, and when we celebrate our many cultures.  That's the Canada I'm proud of.


Posted by IreneJ at 10:15 AM No comments: Links to this post