I experienced my first death when I lost my mother.  I was only 14, and I didn't know much about life, let alone how to grieve for the loss of it.  I didn't see her die, I was kept away from it.  The loss of my mother at such a young age was enormous.  It was terrifying.  What is death?  Where did my mother go, if anywhere?  Why did she have to leave me?  What do I do?

I was off for a couple of days from school but eventually I had to return.  My home room teacher assigned someone to watch me, to make sure I was okay.   Other kids looked at me funny.  They didn't know how to talk to me, what to say.  It was almost like I had some kind of death disease and they could catch it.  I remember coming home from school one day and just calling out to my mother, just to hear the sound of myself saying it. It took a lot of years to figure it all out for myself, and I took many paths trying to find answers to all of my questions.  Every year on the anniversary of her death, I would count back.  One year, five, ten years, fifteen years.  I would cry almost every time I added another year.

When I lost my Dad only a couple of weeks ago, my feelings were equally as profound, but not about the same things.  I am 56, not 14.  The world is a whole different place at this point in my life.  I'm not terrified, the way I was the first time.  I know what death is, and I know my father didn't go anywhere.  He just died.  And it was simply time for him to leave me.  I'm not sure I was prepared, however, for what dying really looks like and watching him go through it.

I experienced the loss of many others in between the deaths of my parents;  relatives, friends, acquaintances. Almost every time, it would be like revisiting my mother's death.  Not as intensely, of course, but something of it would remind me of being 14 again.  That fear would come back, that sense of how utterly vulnerable we are, and how it could happen at any time to any one. Where did they go?  What does it mean?  For a long time after my mother died, I was afraid to ask my Dad what it looked like to see her die.  I kept envisioning some sort of terrifying, thrashing, screaming event, having only ever seen it in the movies.  It was always curious to me to see obituaries saying that people died "peacefully".  What is peaceful about death? I heard people talking about it as if it were a kind of "high", experiencing someone's death.  I never got that.

Last year I think I had a sense that it wouldn't be long before my father was also gone.  I remember I started to have anxiety attacks and heart palpitations to the point of going to the doctor, which is a rare thing for me.  I thought it was physical, and then realized it was about me coming to terms with the fact that my father was going to die soon too.  What was that going to be like?

When I went over to the mainland for the last time, I was relieved to hear the doctor say that my father would likely have an easier time of it because he had pneumonia in one lung.  He said "If there's any easy way to go..."   Dad had been refusing medication and food for several days, and the nurses had begun to give him regular doses of morphine to keep him comfortable.  He was pretty much asleep most of the time, except for occasional twitches.  On the last morning, however, as soon as we got there I could hear that his breathing was somewhat more laboured than it had been the day before.   And by the late afternoon, he was twitching and moaning from time to time.  I was worried that he was suffering, so the nurse gave him another dose of morphine and said she would do so every hour from then on.  I asked her how long it would take the morphine to kick in, and she replied it would take about fifteen minutes.

It was the longest fifteen minutes I'd ever experienced.  And when we reached that goalpost, he didn't stop struggling.  At one point he opened one eye, and seemed to be trying to communicate. We kept talking to him, trying to calm him.

Then his body suddenly seemed more quiet.  I wondered if he was breathing at all.  And that's when it happened.  He took in one big, deep, final breath, and let it go.  I knew right away.  "He's gone," I said.  I remembered hearing about that at some point in the past, about a person taking one big last breath and then dying.  That's how I knew what it was.  I ran out to the hall to try to find a nurse.  When a group of them saw me coming, they came running.

It took a long minute checking for a pulse before the nurse finally said "He is gone."  The next few minutes and hours were a blur...we were trying to call people, trying to grasp it had actually happened, someone brought us tea and sandwiches, we made more phone calls.  I kept thinking about that last breath and how profound it was to watch him take it.

I was walking down the hall of the care facility a little while later when it hit me.  That last breath.  I remembered.

A few years after my mother died, I finally got up the nerve to ask my Dad what it was like.  He said it was not anything like the movies, it was very peaceful.  She was there one minute, and then she took one long, last breath, let it go, and then she was gone. 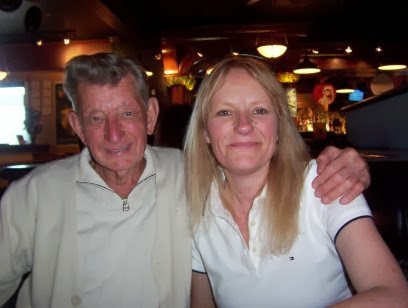 Posted by IreneJ at 4:09 PM No comments: Links to this post