From Rags To Kitchens Part 4

Funny how the horror stories come out when you start talking about home renos.  We've been hearing all kinds of them from everywhere since we started talking about our kitchen reno...nobody tells you about the time something went perfectly and like clockwork...it's always disaster.

One guitar student of mine relayed his reno story, explaining how their renos were so extensive that they moved their young family out to the in-laws while it was being done.  He decided to go to the house and check up the day after the demolition, only to find beer cans strewn about, cigarette butts and used chewing gum stuck to walls.  The door was left unlocked too.  What a nightmare!

The only glitch for us so far has been the timing of the cabinets, although that one glitch has changed everything.  We were originally expecting them the week of October 13th, and found out that they wouldn't be arriving until the week of the 21st.  I had to re-book the delivery of the appliances for after the cabinet installation, which wasn't a big deal. But there will be a bigger gap between the prep work and the cabinet arrival.  And that also delays the quartz counters, which are installed after the cabinets because the counter installers have to take a final measurement only after the cabinets are in. Then there's another 1-2 week wait for them to be made.  And you can't have a sink in until the counters are in, so we'll only be able to use the kitchen in a half-assed way.

In spite of the cabinet delay, the kitchen demolition and re-design began this week anyway. Wednesday morning my husband and I stood in the kitchen, now completely stripped of everything except the cupboards and appliances, wondering how we were going to feel about the next month or two. ( I say "or two" because everyone tells you that whatever time you expect it to take, double it.)

Here's one corner of the kitchen as it appeared early Wednesday morning: 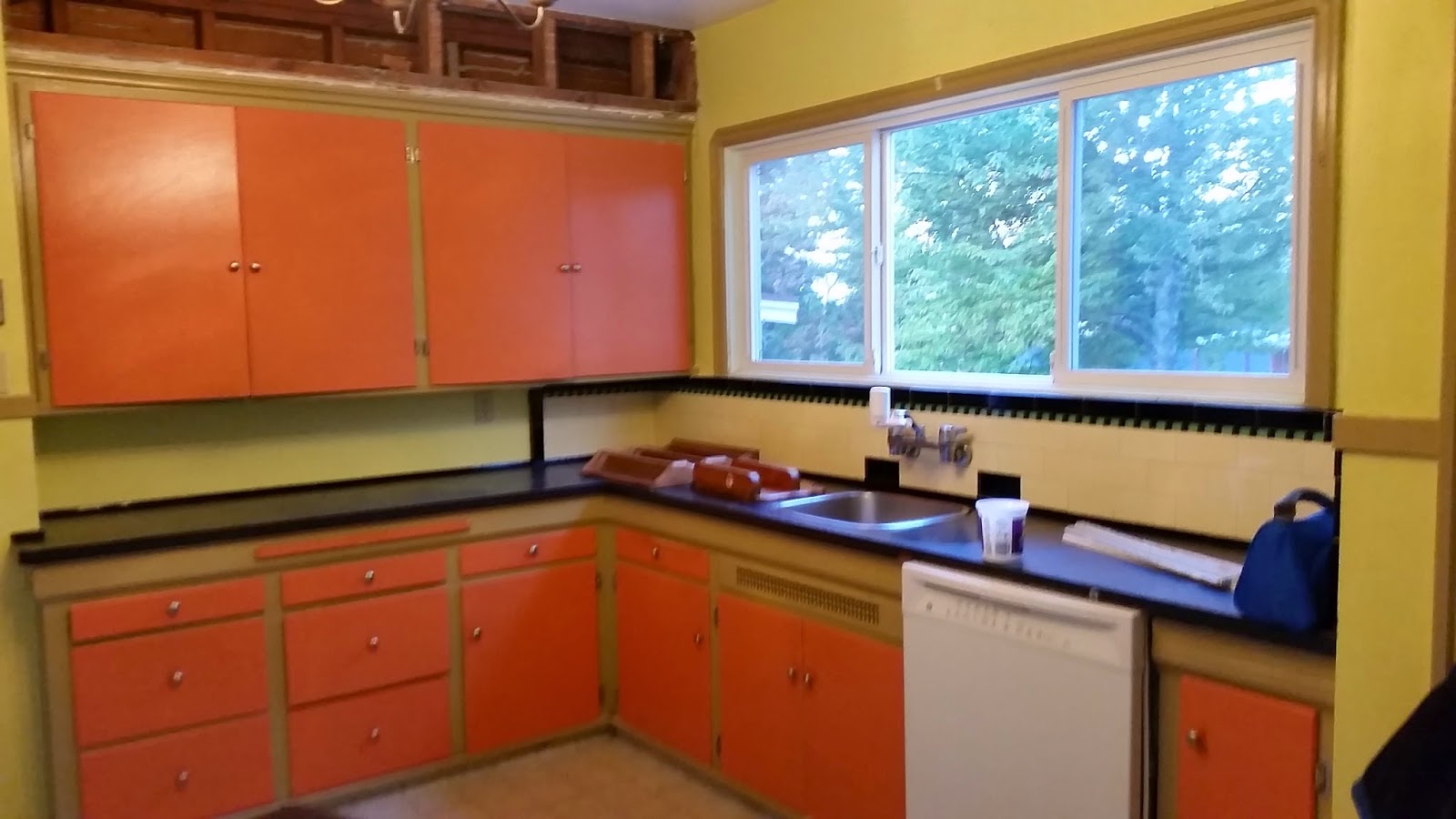 And here it is at the end of the day: 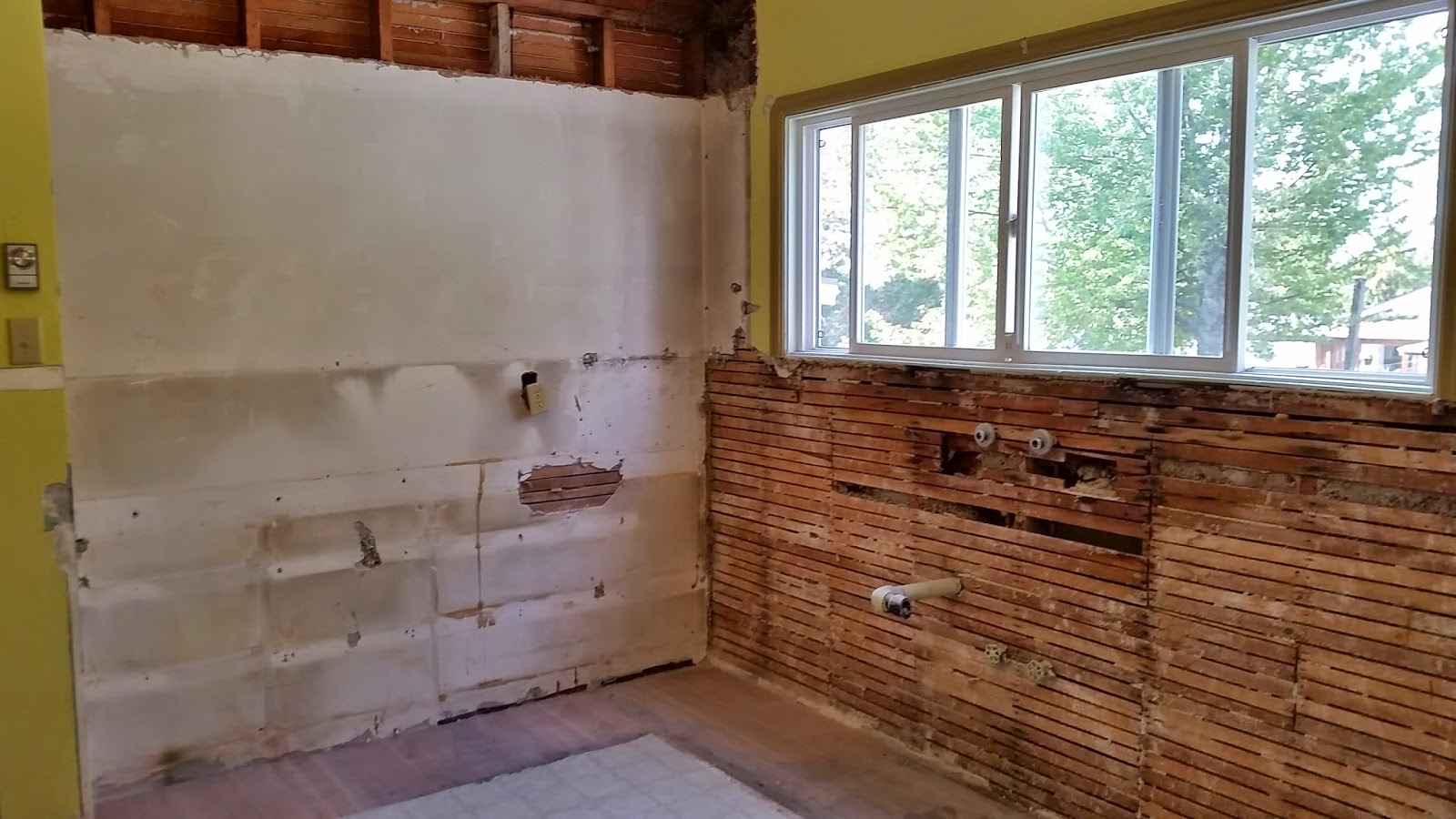 The first thing that had to be done was to move the fridge into the dining room and the stove outside.  We have sold them to someone my husband works with, and at this writing the stove has already been delivered to him.  We'll hang on to the fridge while we still need it. It took about 4 hours to tear down the old cabinets, counters and an old-fashioned pantry, along with the removal and clean up, which was pretty close to what our contractor estimated.

Day two, Thursday, was a little crazier, and certainly longer.  The electrician came in with his two guys and then the process of figuring out all of the bits and pieces that had to be done began.  The stove will be in a different place, the baseboard heater moved, new outlets, pot lights under the upper cabinets, decommissioning old outlets, moving old wires around or replacing them entirely.  Will this fit there?  What height should the outlets be?  Do you still need this here?  That there?  How many? The questions were coming at me fast and furious and after having not slept well for several nights, I was hoping I was answering them all intelligently.

Thank goodness for our contractor Steve, who helped me think through some of the choices.  For instance, do you lower the light switches to what is now a standard height?  He suggested that since the outlets in the rest of the house were still higher, it would make sense to keep them all that way.

As the electricians were working, Steve was on the phone talking to the plumber and drywaller. He had them come in and checking things out while everything else was in progress. The plumber did some preliminary work on the pipes for the taps, moving them from where they were, protruding out of the wall as old taps used to be, to coming up from below. At one pointed I counted six guys working in our little kitchen. This was just three of them, the other three were to the right, out of the shot: 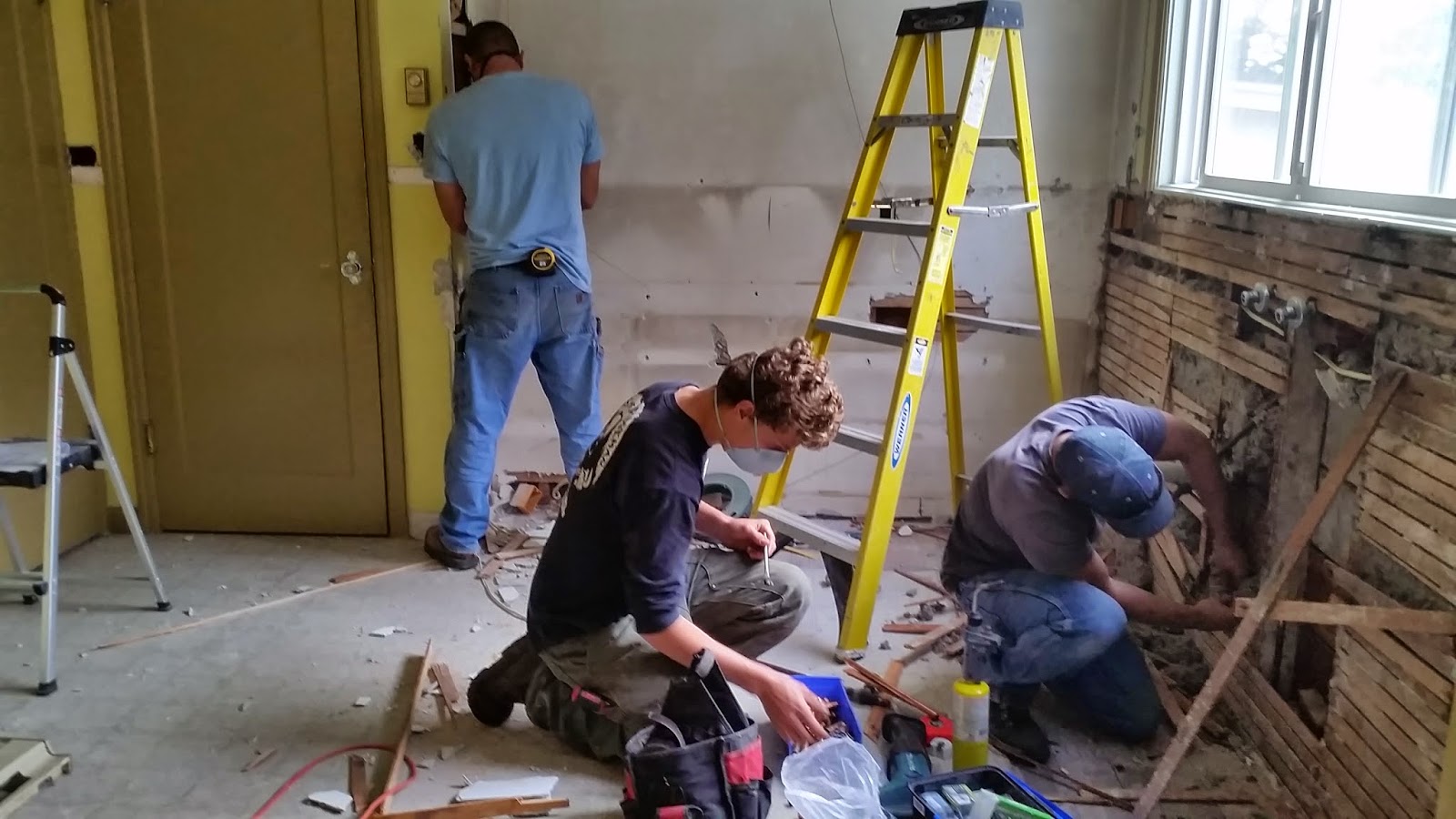 On Friday morning before my husband left for work, we poured over the kitchen and all of the changes that had been made.  We still had some questions about the plumbing and drywall, so I made a mental note and when Steve arrived to do some work on his own, I bombarded him again.  We have some friends who had gone through their kitchen renovation in a more do-it-yourself manner, basically doing what they could on their own and hiring labourers for things they couldn't do.  I think having a contractor has worked better for us simply because we don't have the experience to know the process well enough.  If you have a misstep, you might have to back-track or re-do something you weren't planning to.  Not that I expect everything to go completely smoothly, but there's less of a chance of us screwing it up!

I found out that the ship carrying our cabinets had broken down in the middle of the Pacific Ocean, and that's why they were delayed.  They actually had to send another container ship out to the broken down one, and transfer all the containers over.  That takes at least a week!  Can you imagine the logistics of that?  What a nightmare.

Anyway, besides that, everything has been relatively smooth.  The only inconvenience is our makeshift kitchen in the dining room.  It took us a couple of days to get used to the temporary configuration and we're still tripping over each other a bit, but besides the mess and clutter, we're just fine.  We wash our dishes in the bathroom sink with a neat little scrub brush that has a handle holding detergent in it.  I think it's a camping gadget, but it's perfect for our situation too.  Everything is washed as soon as it is used.  We got a cheap little hot plate and a used toaster oven so really, there is nothing we can't do.

Except a turkey. Fortunately, we have generous friends who have invited us there for Thanksgiving :-)  What more could we possibly need?