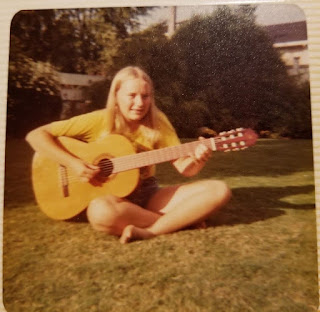 I actually wanted to play piano. I remember being very small and at the house of some friends of my parents. They had a piano in their parlour, and I remember sitting on the bench, by myself, plunking out notes and realizing that I could play Mary Had A Little Lamb by ear. I was probably around 5 years old.

A few years later when I bugged my parents for a piano, they said it was too expensive.

Then a friend of mine, Kelly, got a guitar and some lessons. She showed me a song she was learning. I think she was miffed when she handed me her guitar and I was able to play by ear what she had been struggling to learn through sheet music. I pretty much fell in love with the guitar at that point, and since it was much more affordable than a piano, that's what my parents bought me. It was 1969, I was 12, and I was hooked.

The guitar came from Simpson Sears and cost less than $50, but I loved it. I had no idea what I was doing, other than that little instrumental that my friend Kelly showed me. Someone else showed me a couple of "cheat" chords, meaning that they weren't full chord shapes, but that was all I needed.  My parents also bought me a clarinet when I started to play in my elementary school band, but the guitar was really my first love.

I didn't know how to play the songs I liked on the radio, so I made up my own. That's how the songwriting began. I wrote about my house, I made up little melodies, whatever struck me. I remember my mother, who had been listening to me struggle with writing some words to one of those songs, suggested a line. I used it.

When she died a couple of years later, my father gave me the money she had in her savings account. With some of it, I bought the guitar you see in the picture above. I was about 15 in that shot, sitting in my back yard. I still have it, the old Yamaha classical. It's something I'll never let go of because it came from my mama.

Eventually I did learn to play more conventional chords and continued to play and write and sing. In junior high school, I started writing and performing with my friend Lynn. When I moved away from home, I spent a lot of time writing songs. I joined another group and we all lived together in a house we rented. We did mostly cover songs, but I also wrote a couple of songs for that band. Eventually we split up and I was on my own again, but I kept writing and performing on my own here and there while holding down a full time job. Music isn't a money making venture for most people! I worked at the Vancouver Public Library, first as a Library Assistant, and then as a computer technician (they called us computer "operators" in those days!). As the library system became automated, I ended up teaching a lot of the staff how to use a computer. I realized I had a knack for, and a love of, teaching.

When I moved to Victoria and got married, raising a family took me away from the performing aspect for a little while, but eventually I got back to it. And sometime in 1989, I woke up one day and realized that pretty much all of the money I made from part time work was going to daycare. I needed to do something that would allow me to work from home. Then it hit me; I could teach guitar! So I wrote a proposal to the City Of Victoria for their recreation department, and the next thing you know, I had about 20 students signed up for a beginner guitar class. That was the fall of 1989. And that's where my "learning to teach" began.

Teaching is a separate thing from "knowing". Many people think that because they know something, they can teach it. And some can, of course. But teaching is actually not so much about knowing, it's about communicating.The first and most important thing I learned was to SLOW DOWN. You don't just put something in front of a student and start playing it; you work on it in small bites, especially the things they haven't played before. And people learn in different ways, so part of the job is figuring out what is the best way to get an idea across.

Sometimes the biggest challenge is to help a student relax and just have fun! Adults, especially, can be really hard on themselves and have high expectations. Adults actually learn more quickly than kids, but kids are used to learning all the time, so they don't have the same demands of themselves. And they aren't as afraid of making mistakes! You've got to laugh at your mistakes. So my motto really should be SLOW DOWN and HAVE FUN!

The other day I realized that it has been 50 years since I first picked up a guitar, and 30 years since I started teaching. When I first plunked out the notes to Mary Had A Little Lamb on that parlour piano, little did I realize how music would become such a huge part of my life. Lucky me!